TikTok’s Impact On The Music Industry

Trends, challenges and charts: TikTok’s impact on the music industry

TikTok: a powerhouse of content, trends, challenges – and a place to discover new music. This week, we’re looking into the way TikTok has massively affected the way we experience the music industry.

Music and audio is central to TikTok – the platform is made up of millions of short videos using songs as a background for constantly changing trends, most often involving dancing or lipsyncing. Choosing the right audio for a TikTok is an important part of the process – neglect this and it could impact the impression rate of the video.

The listening power of TikTok is incredible – just think of Kate Bush’s resurgence in the charts- with a song from 1985. Thousands upon thousands of the platform’s users heard the song Running Up That Hill (A Deal With God) in Netflix’s hit show Stranger Things and reused the song in their videos – and the charts took note. Kate Bush topped the charts 37 years after the song was originally released – beating the likes of Harry Styles and Lizzo (whose songs have a TikTok dominance of their own). 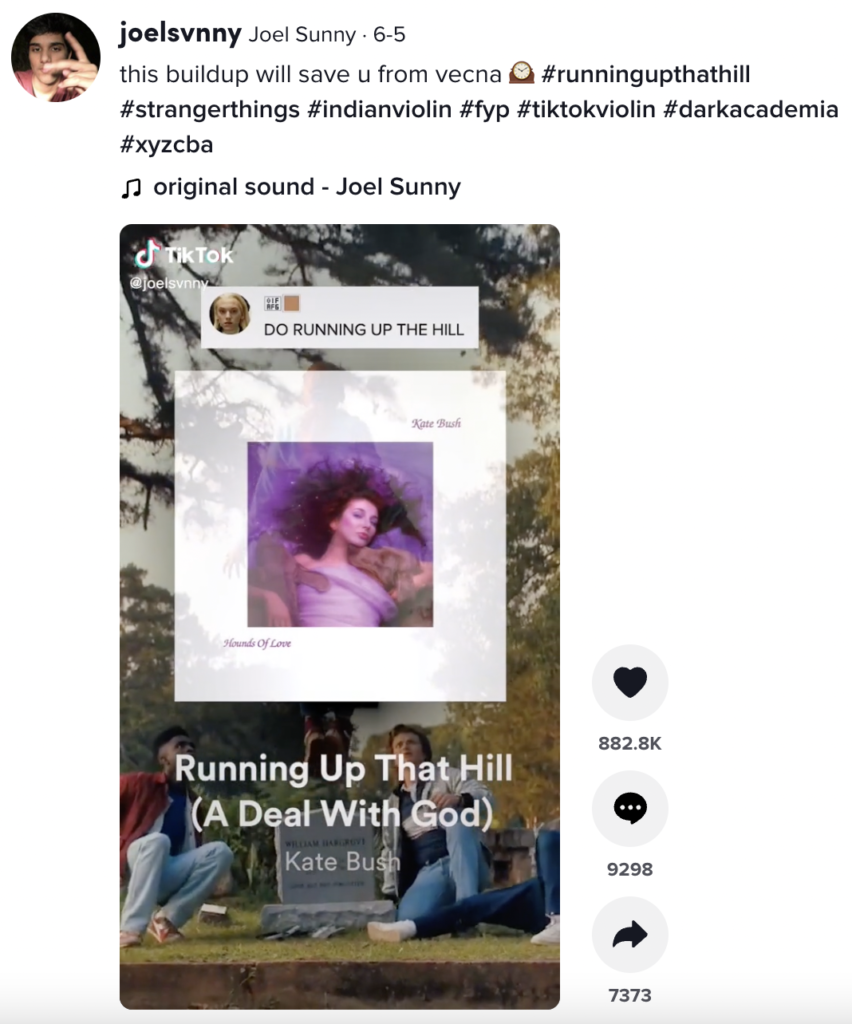 ^ An example of the thousands of TikTok videos created recently that use Kate Bush’s 1985 track.

TikTok has become a place to discover new music, whether it’s from 2022 or the mid-80s. According to an MRC Data study, 67% of TikTok users are likely to search for songs on music-streaming apps after hearing them on TikTok. And radio stations take note of this, playing the songs that people are hyped up about.

We may only recognise some songs from a few bars – as TikTok videos use the catchiest sections of songs, propelling them to a globally recognisable, trending status (think Gayle’s ABCDEFU or Bo Burnham’s Bezos I). Radio plays give us access to the full song, whether it be from global stars or smaller artists getting their big break. The sheer power of the app for music discovery has never been seen before. 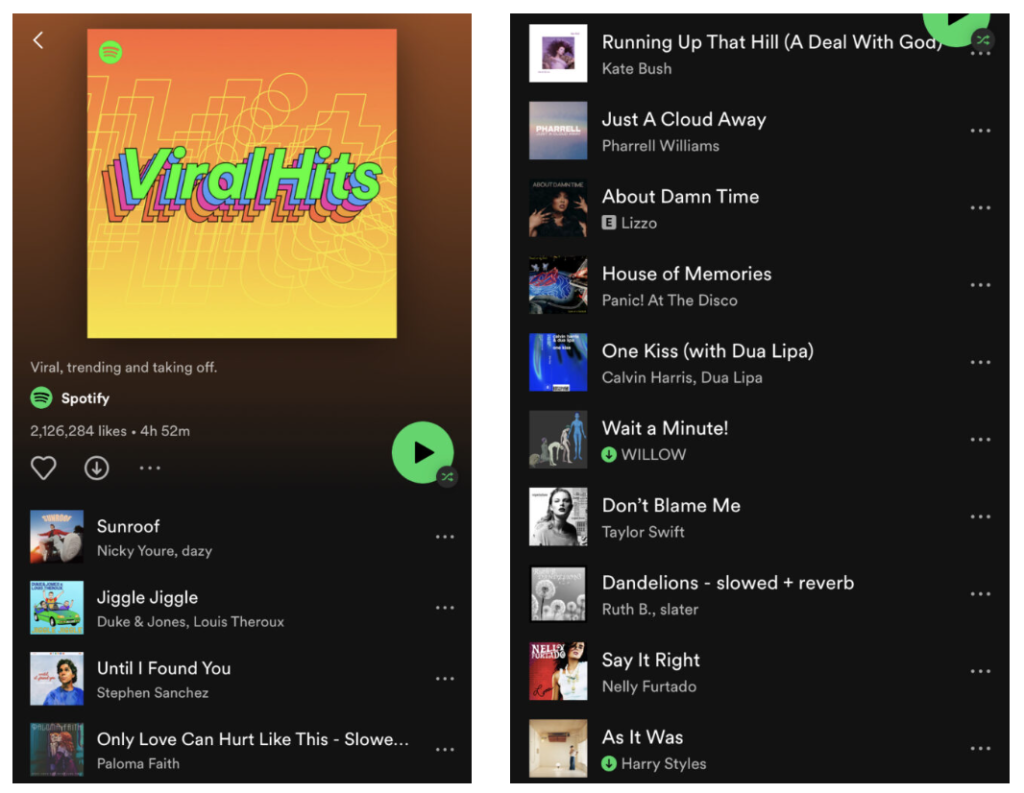 ^ Spotify created a playlist specifically for the TikTok user wanting to find the songs they keep seeing on the platform.

Artists and record labels are becoming accustomed to TikTok as a golden opportunity to achieve global success. Songs that ’make it’ on the platform are lip-synced, remixed, combined, accompanied by a popular dances created and shared on TikTok – and when trends fade, many songs live on with new adoring audiences.

Some may argue that mass TikTok popularity causes songs to lose a little of their sparkle, as they’re overplayed and overshared as a way to get views on the platform. Music has been turned into a tool on TikTok, some may say- a resource to achieve short-lived fame, rather than something to be enjoyed for its own sake.

Or is music simply being enjoyed in a different way? TikTok has revolutionised how we experience good music – by watching and participating in dance trends, music challenges, creatively using tracks to make entertaining videos that get people talking. Authenticity hasn’t been lost – just transformed, and we should move with the times and enjoy the ride. Passive listening has made way for creative expression.

Some artists don’t wish to participate- rather understandably in a rapidly changing world. They must deal with record companies wanting to tug at TikTok’s potential to turn a song into a viral hit. It’s certainly advisable to have a marketing strategy that pays attention to the power of TikTok, such as creating music challenges to promote the sharing of catchy new singles. Yet it’s important to preserve artists’ authenticity – by not producing songs solely for the purpose of good performance on the platform.

Songs don’t need to be ‘TikTokified’ to reach the screens of millions- the algorithm is on your side if your song has good quality production and a memorable hook. Achieving TikTok stardom cannot be made – we have to leave it to the viewers to decide a song’s fate- but more often than not, it’s time will come around, even if not straightaway. Songs like Britney Spears’s Toxic (2004), Time Moves Slow by BADBADNOTGOOD (2016) and Love Shack by The B-52’s (1989) made the rounds on TikTok many years after their original release dates.

With the new listening power of TikTok, songs will never die – they’ll be re-discovered and loved all over again. Just look at Kate Bush’s Running Up That Hill – without TikTok, the momentum would never have begun.

Need help navigating the realm of TikTok? That’s where we come in. Our team of digital marketing specialists are on hand to help your brand reach new heights – and TikTok has become an important platform to pay attention to here. Book a call with us today to discover how we can create a bespoke TikTok campaign for your brand, utilising trending songs and sounds to get your ads in front of new audiences 🚀